Loyola Center for Counseling and EducationCollege of Nursing and Health 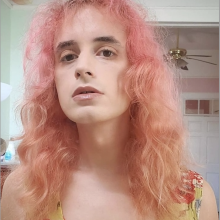 Cypress is originally from Connecticut, where she earned a BFA in Theatre in 2012. After earning her bachelor's, she moved to New York City where she studied avant-garde dance and participated in creating experimental and political theatre with The Living Theatre. After moving to New Orleans in 2016 she helped create a surrealist theatre collective called the Corrijeune Collective and she founded the Vanishing Performance Festival. Through her work in embodied performance and political activism she became interested in somatic therapy and began her counseling studies to follow that interest. Now she is focused on applying social justice and somatic approaches to counseling with survivors of trauma and LGBTQIA+ clients. She is interested in dismantling ideas of normativity and centering the effects of oppression and marginalization in her work.