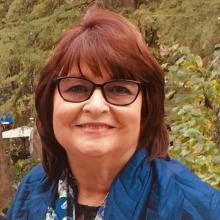 Gwendolyn George is one of Loyola's faculty advisors for graduate and doctoral Nursing students. She ensures that the Loyola University School of Nursing is compliant with the Board of Nursing in all fifty states. She also teaches courses and mentors doctoral students to complete their scholarly projects. Dr. George served as Program Coordinator for the DNP and MSN programs at Loyola from 2003-2015, overseeing curriculum development, accreditation, faculty development, program admissions, and marketing.

Her accomplishments during her time at Loyola include: